New: Area II YR Youth Council to be formed in 2023

Hey, Young Riders! Would you like to have a say in what activities Area II develops this year? For 2023 we will be re-establishing the Young Rider Youth Council for Area 2.  The YR Youth Council will:

1.  Define the future activities for the Area 2 YR Program.
2.  Communications/Marketing of Program Activities and Success
3.  Actively engage in the Fundraising and other YR Support activities
Requirements:
1.  Young Rider Program Member enthusiastic to support the YR MIssion
2.  Time commitment 6-8 volunteer hours per quarter (every 3 months)
This is a GREAT thing to have on your resume, and for those who are considering applications for any national level YR program, being an active Council Member shows interest and commitment! Please send Chris Donovan your interest and any questions.
--

Here is the Year Area 2 Leaderboard Results for IEL.  We will recognize these teams at the Area 2 Annual Meeting.  I want to encourage you to renew for 2023 as a great way to promote your training program.

We had a great discussion about three main topics at the USEA Annual Meeting in Savannah today. We covered:1. 2024 IEL Championships  2. Creation of a National IEL Team Leaderboard  3. How to promote and grow the program

Many thanks to all who participated this year. We appreciate each, and every one of you!

Our Year End awards are based on EXCELLENCE. Your average score, generated from your four best scores over the season, is your final score. Those who volunteer or participate with a completion in a Classic Three-day event will receive bonus deductions. Remember, you must have 3 or more scores to receive a year end award. For complete information on how we calculate year end award standings, please see the Rules linked here.  YEA Rules 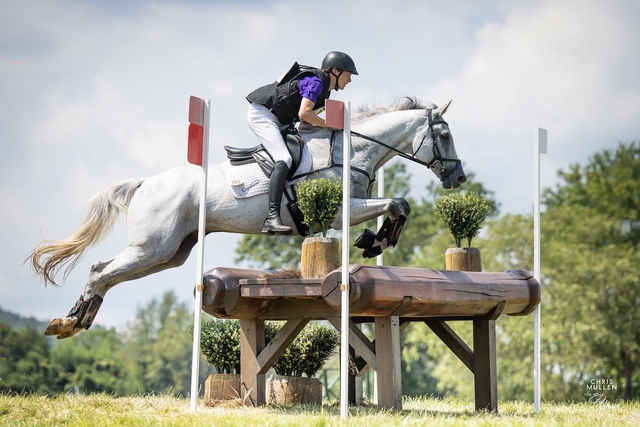 It's time to cheer on our Area II Young Riders! We will be featuring all of our Young Rider competitors that have entered the Dutta Corp. national Young Rider Championship this year to be held at Tryon International Equestrian Center, Millspring, NC., Nov. 9-13, 2022. (Watch LIVE on USEFNetwork.) 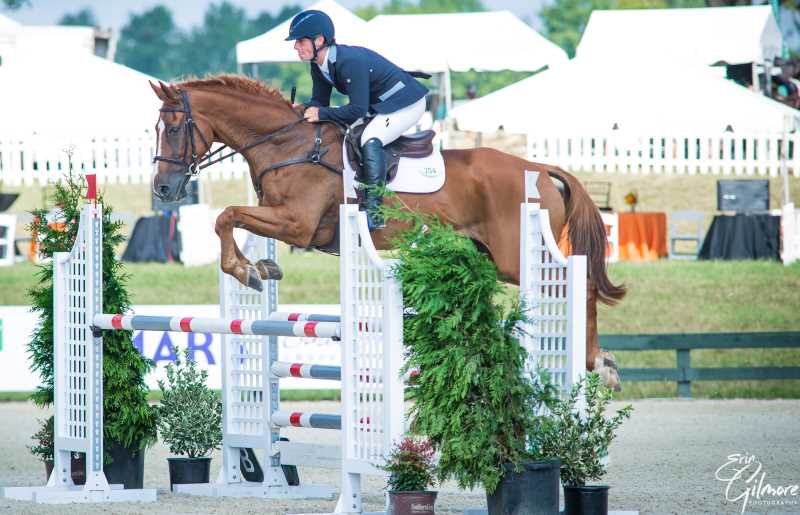 Noah Stanlaske
CCI1* Competitor Noah Stanlaske, 17, is a high school junior taking classes at Laurel Springs High School, and is from McMurray, PA. Noah has ridden his long-time partner, Chesterland, a 15yo Thoroughbred (Innkeeper – Windsor Bonnet) from his first event at Beginner Novice level to CCI2*. He is also entered on DHI Showman, an 8yo Warmblood (Elvis Ter Putte - Bubertha), and trains in Pennsylvania with National Champion 5* rider, Pan Am medalist Buck Davidson and his father, multiple Olympic medalist and World Champion Bruce Davidson. In 2022, Noah and Chesterland completed at the CCI2-L level at the Ocala International, and the CCI2-S at Great Meadows International. Riding DHI Showman, Noah won a Preliminary division at the Maryland Horse Trials this summer. Erin Gilmore Photo 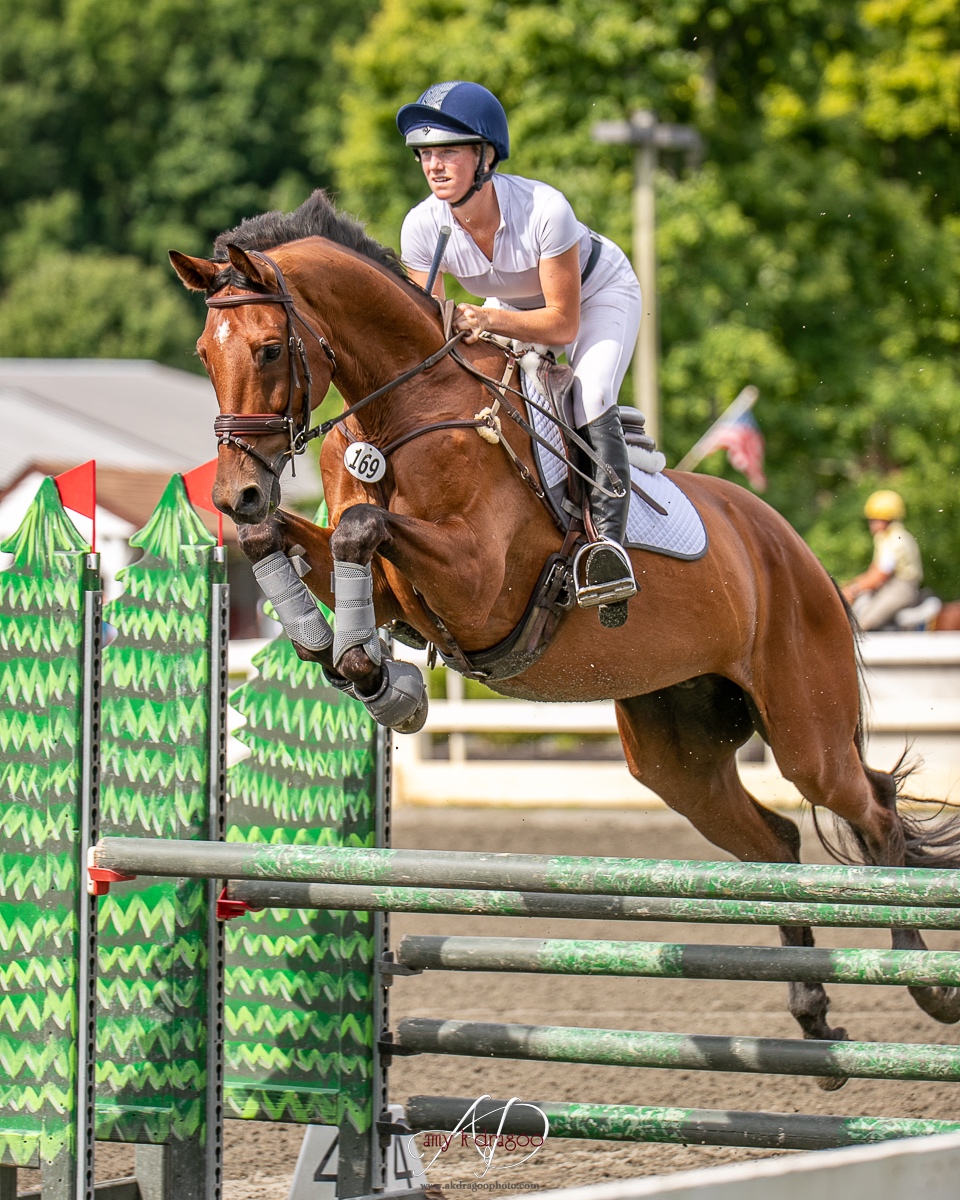 Meg Pellegrini
Meg Pellegrini,18, is from Wayne, PA. She began eventing in Southern California and relocated from the West Coast to train with Lillian Heard out of Cochranville, PA. Meg competes on three horses: her own RF Eloquence (Contender-Ginger), 17yo Holsteiner; her own Global Naxos (Nektos-Komtess IV), 10yo Holsteiner; and her and Molly Pellegrini’s Cassilio G, (Cassiliano – Dormani), 7yo Holsteiner. Meg was named to the USEF Emerging Athlete 25 program, and was part of the Area II gold medal winning squad at the YRC in 2021. She’s the second leading Young Rider in the nation as of November 1 and has competition successes up to the CCI3*L level. This year, Meg will be competing Global Naxos and Cassilio G in the CCI2*L and CCI1*L at Tryon. Amy Dragoo Photo 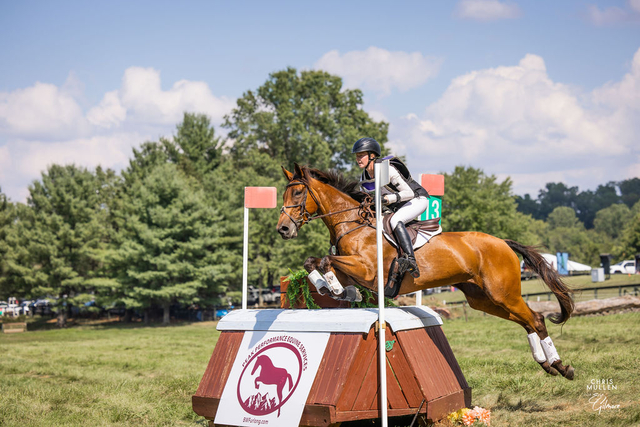 Today's rider is Audrey Ogan who will be competing for Area II on her own Always Cooley in the CCI2-L.

CCI2* Competitor Audrey Ogan is from Charlottesville, VA, where she is a working student for USET Olympic/WEG Team Rider, multiple 5* winning eventer Kim Severson. Audrey grew up on the West Coast riding ponies, began eventing, and moved to Area II in 2020. She rides her own 11yo ISH mare, Always Cooley (Ramiro B – Unknown). This year, they were the third-placed Young Rider at the Great Meadows International CCI2-S, finishing double clear in jumping phases, and won a Preliminary division at Fair Hill International August horse trials. Erin Gilmore Photo

Champs - Thanks to our Supporters!

Please thank and patronize our supporters for the 2022 Area II Championships. They include the following individuals and businesses. Please check for our awards tent on the grounds at Maryland Horse Trials/Loch Moy Farm, Sept. 30-Oct. 1-2! Have a great ride!

MANY THANKS TO Allison Murphy - The Event At Archer

Jordan DeButts has been developing our Instagram page for over a year. Take a look! Thanks, Jordan! https://www.instagram.com/usea.area2/

Area II's list of declared Young Riders for 2022 are final. The USEF has the following riders declared for Area II:

For more information on the Area II Young Rider program, go to the YR Page here.

The USEA Area II MERLIN MEMORIAL Young Event Horse Championship, sponsored by Dr. Elizabeth Callahan in honor of her horse Merlin (Mighty Magic-Leia/Le Champion). “I’m proud of our US-bred event horses, and will continue to support the Young Event Horse program, and our sport, in whatever ways I can. Merlin participated in both the FEH and the YEH, and this award in his memory is for the top placing Young Event Horse in Area 2.” The 2021 winner was Archelos (Despite the Odds-Sailboat Sally) owned by April Shepherd, and ridden by Rebecca Lee.

Also put in service in 2021 is the Cool Na Grena Future Event Horse trophy, also sponsored by Dr. Elizabeth Callahan, and the winner was Utah Beach (Ulmar Mail-Avalon) owned by Monica Fiss-Burdette. Our thanks and appreciate to Dr. Callahan for her support. 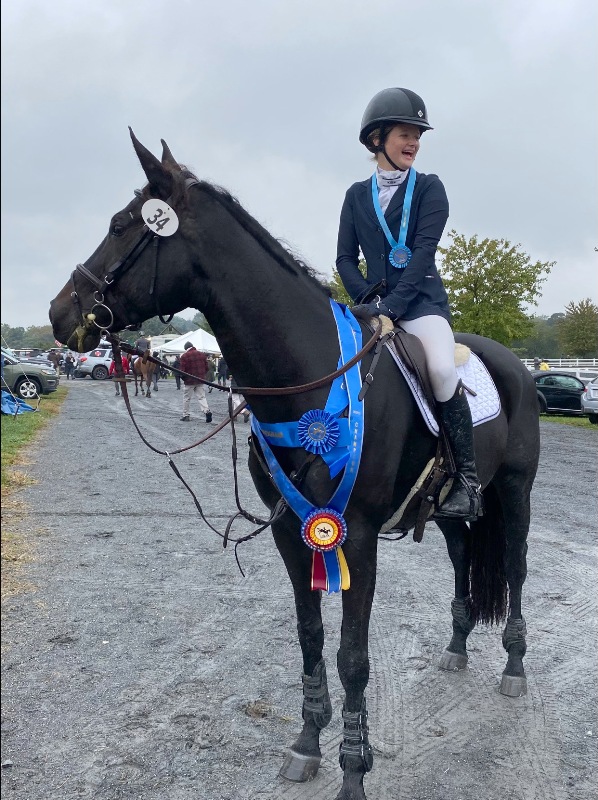